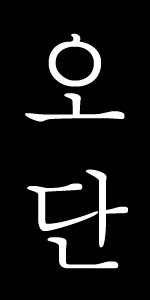 William Tuman, Founder and Head Instructor of River Valley Tae Kwon Do, has been promoted to the rank of O Dan (fifth degree black belt) following an examination in Berkeley, California on December 2, 2017.

As most of my students know, this test was challenging and I made no assumptions about a favorable outcome, so this news is welcome. The promotion is a meaningful achievement for me on a personal level, and it’s very important for the future of River Valley Tae Kwon Do for two reasons. For our advanced black belts, it creates room for the further recognition of exceptional leaders and practitioners via promotion in rank. Regarding the world outside our dojang, it’s validation from the Kukkiwon and some of its most distinguished representatives in the US. Having a Grandmaster lead our school and a head instructor recognized as a Master doesn’t change the way we practice from day to day, but it confirms to our own community that we’re doing something special, and it’s important recognition for our school in the public eye.

On reaching a milestone like this, gratitude to those who have helped me is in order. I’d like to thank Grandmaster Ken Min and Dr. Russell Ahn for the honor of letting me test at the UCMAP. Thanks also to Sally Ho and Rick Vierra who did so much to help me prepare for the test in the days just before. I also appreciate every student of RVTKD who sparred with me, held practice targets, and in other ways, large and small, participated in my training. You know who you are.

Most of all, I will never forget Grandmaster Sean Owen’s efforts to make this test possible in the first place. I didn’t seek this rank, and I didn’t even know he was making inquiries to see if it was possible until his plan was in motion, and he asked me in late August 2017 if I’d be willing to undertake such an adventure. His faith in my ability to prepare for the exam, his belief in the accomplishments of our school, and his steady guidance in the months leading up to the test not only made it possible, but they touched me deeply and made the difficult struggle worthwhile.

Just three more names. Daniel Hays and Andrew Benioff were both teachers I admired when my training began in college, and they continue to inspire me today. Julie Tuman supports everything I do with love and enthusiasm—including and especially this Way that requires so much time and energy when followed properly.

I’m tempted to say that this will probably be my last promotion, but I’ve thought that twice before and been wrong both times. Many things in life are beyond our control, and although sad, unfair, undeserved misfortunes may befall us, it’s equally possible for good things to come our way unexpectedly—through chance, determined work, or a combination of both. The practice of traditional martial arts prepares us to endure and prevail in hard times and to accept rewards with humility, gratitude, and clear-headed satisfaction.

News & Articles
Upcoming Events & Trips
Group Fitness
See all Special Events
Our school's primary focus is Tae Kwon Do classes for adults in the Florence neighborhood of Northampton, Massachusetts. We train four evenings per week and also offer class on Saturday mornings. The oldest Tae Kwon Do school in Northampton, we opened in 1997, and we are proud to have trained hundreds of students in our community over more than 20 years.
JOIN OUR SCHOOL
© 2020 River Valley Tae Kwon Do
Back To Top
×