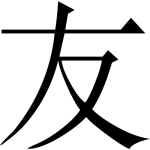 It’s been a while since I’ve posted in our Five Tenets of Jidokwan series, and I’m happy to have a good reason to return to the theme. I’d been looking for an occasion to write about Tenet Three: Friendship Among Peers, and when I watched RGB, the recent documentary about US Supreme Court Justice Ruth Bader Ginsberg, I knew it was time. At one point in the film, she discusses a daily ritual that she and other Justices practice:

Every day, before we sit in the Court, the first thing we do is we go around the room, each Justice shaking hands with every other. We know that collegiality is very important to the effective working of the Court, so we better respect each other, and even like each other.

The following several minutes are a touching segment about Ginsberg’s close friendship with Justice Antonin Scalia. If you know your Supreme Court Justices, you’re probably aware that her politics lean to the left and that Scalia was known for his far right-wing views and rulings. It’s hard to think of two more improbable friends, since both had powerful intellects and firmly held beliefs that were in direct opposition. They clashed year after year on most cases concerning social issues, and especially those focused on gender and women’s rights. Yet they invariably treated one another with respect, and outside the court, they socialized frequently—having dinner, going to the opera together, teasing one another, and laughing with obvious enjoyment and deep bonds of friendship.1

The morning handshake ritual Ginsberg describes helps nine extremely intelligent, ambitious, and powerful individuals work smoothly together. Although we may not agree with certain decisions handed down by the Court, most Americans believe that the SCOTUS is the least dysfunctional arm of the federal government. We can see the consequences of having petty, adversarial relationships by looking at an equivalent branch of government: the US Congress. In other words, this simple tradition works. The expectation of collegiality creates collegiality. In the case of Ginsberg and Scalia, it may have helped two people, who could quite reasonably have loathed one another, instead become lifelong friends.

In the US Supreme Court, having a candid and friendly working relationship is important because the Justices are deciding the most important laws of the land. Even if we may not agree with every decision the Court hands down, we can admire the conscious effort they make daily to make the institution function well.

Friendship Among Peers in the Dojang

When we practice Taekwondo, we train to perfect techniques that have the potential to harm others, should we choose to use them that way. The Third Tenet of Jidokwan is similar to the Supreme Court’s morning handshake ritual: it requires us to not just tolerate one another, but to be genuine friends with our training partners. As Ginsberg says “We better respect each other, and even like each other.”

In martial arts training, we have an obligation to get along because we routinely perform dangerous tasks like free sparring or certain kinds of self-defense drills. Friendship Among Peers encourages us to build a sense of camaraderie so we can trust our sparring partners, for example, to stop a half-inch before striking or kicking us. It’s not hard to imagine a school where students “accidentally” make hard contact with someone who, by coincidence, they happen to dislike. This would inevitably lead to increasing disharmony at best, serious injuries at worst, and an atmosphere of fear and distrust.

To prevent this, we actively decide that we will be friends with every one of our fellow students and instructors, period. We are friends purely because we are fellow practitioners of the Jidokwan style of Taekwondo at River Valley Taekwondo. No RVTKD student requires any other qualification to receive every other student’s goodwill and friendship.

Here are some implications of friendship that we might experience in the dojang:

Origins of Friendship Among Peers 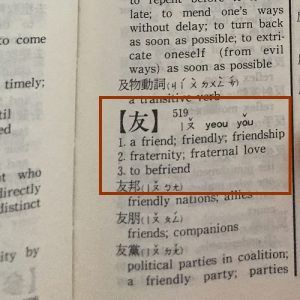 If we look at the hanja for this tenet, we see that the most general definition is simply “friendship.” Because this is written in the old style of writing, in which Korean words are mapped to Chinese characters, we need to consider the connotations that a single character would carry in the original writing system. For most Chinese readers, and therefore the “elevated” language the Five Tenets were conceived in, this character would usually suggest a specific type of friendship: fraternity. In other words, the feeling and bond experienced among brothers.

In a Confucian society, which had increasing influence in Silla (early Korea) at the time these Tenets were conceived,2 the familial bond between brothers was considered to be among the closest friendships possible. Since our school exists in the US in the twenty-first century, a profoundly different time and place, we can acknowledge the original masculine sense of the word “fraternity” while extending the spirit to relationships among people of every gender.3 The key concept is that the founders of Jidokwan require us to be more than “work friends” or the kind of person you exchange small talk with when you cross paths at the grocery store. In the modern West, we might approximate this by combining the “all for one, and one for all” sensibility of the Three Musketeers with the sense of loyalty and benevolent obligation you might feel toward a close family member.

Note that this tenet doesn’t ask us to think of every RVTKD student as our BFF, or to merge everyone into your social circle and hang out together outside the dojang. Those are different types of friendship, which are based on common interests and values, personal chemistry, finding the same things funny, and other qualities that vary from person to person. The phrase “you don’t choose your relatives” is relevant here: you don’t choose your fellow Taekwondo practitioners either, but you have a similar obligation to support them and offer ongoing goodwill that transcends your personal tastes and preferences.

We are friends purely because we are fellow practitioners of the Jidokwan style of Taekwondo at River Valley Taekwondo. No RVTKD student requires any other qualification to receive every other student’s goodwill and friendship.

You may ask yourself: Isn’t friendship beyond my control? I either like someone or I don’t?

In the context of this Tenet, liking a person—and by extension, friendship—is similar to anger: it’s possible to decide whether you’ll like someone or not (or become angry or not) up to a point. It’s true that there are some circumstances where it’s inappropriate to be friends with someone, or when it’s normal and reasonable to become angry. But these are much less common than the times when we can just say “I’m not going to let that bother me, I’ll just move on.”

Returning to the sense of familial bond implied by the hanja, think of how you might respond to a dreaded but familiar scenario: a Thanksgiving guest with radically different politics, who loves to spout divisive opinions. You don’t have to agree with what they say, but if your response is angry or equally abrasive, it makes everyone uncomfortable and makes the group less favorably disposed to both of you. If you change the subject, or engage them respectfully and disagree in a friendly and constructive way, familial harmony is restored. This may be hard work, and if someone’s behavior is truly beyond the pale, stronger steps may need to be taken, but in most cases practicing harmony leads to happier times and a healthier group.

This isn’t to say that Friendship Among Peers is concerned with managing conflict, that’s just one possible application. In a larger and more positive sense, this Tenet of Jidokwan shows us how to recognize one another’s strengths, to forgive and support our weaknesses, and to cultivate a genuine appreciation of our fellow students based on respect and goodwill. For those of us who practice our martial art for many years, this friendship inside the dojang may lead to cherished friendships outside as well. For some of us, these relationships may become as valued as the lessons and achievements gained through training. Through our Taekwondo training, we may be as lucky as Ginsberg and Scalia, where the custom of a respected institution brought together two unlikely friends, and facilitated by this simple daily ritual, something beautiful and surprising came to be.

2 Although the precise year isn’t documented, the code of the Hwarang was written by Won Gwang Beop Sa not long after 600 CE, shortly before Silla allied with the Tang dynasty to overpower rival kingdoms Goguryeo and Baekje and unify the Korean peninsula. In less than 300 years, these unified territories would evolve into the Goryeo (Koryo) state.

3 As discussed in previous blog posts, the Confucian influences on traditional East Asian martial art practice may be problematic for many contemporary practitioners in the US if interpreted literally. In our school, we strive to separate the spirit behind such sentiments from gender assignments (usually male) and apply the best, most generous impulse behind these concepts to everyone.