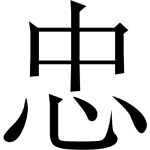 Before continuing a series of posts interpreting the Five Tenets of Jidokwan, I’d like to revisit my original post about the First Tenet, which I wrote shortly before receiving information that spurred an investigation into a more precise translation of our Five Tenets. Future posts will discuss the Second through Fifth Tenets.

The earlier post discussed the concept of “Love of Country,” and much of what I said there still applies to our current translation: “Loyalty to Country.” Questions of patriotism and service to one’s nation; work to improve local and smaller communities; the sense of a purpose larger than one’s self; and the idea of training with the highest possible stakes in mind—all of these are still relevant whether the operative word is “Love” or “Loyalty.” This post, then, first addresses what may be different with the change of a single word. Is the different language important at all? If so, how?

The character for Loyalty, pictured here in a Chinese-English dictionary, 1 contains two parts, which correspond to the sounds it makes when spoken:

So Loyalty describes a thing that we keep at the center of our being. This idea may overlap with the way we conceive of the word “Love” but the differences are important. Here are some of the thoughts that come to me when comparing the two words:

Loyalty to Country in the US Today

It’s no secret that many people in our region, and perhaps in our Taekwondo school, don’t approve of the current officeholders in the US federal government in early 2017. Massachusetts is the only state in the nation where not a single county voted for the individual who now holds the presidency, for example. Because opinions in US politics have possibly never been stronger and more divergent, except during the 1860s, it seems reasonable to address the idea of “Loyalty to Country” in the context of this political moment.

First, it has been remarked in many places that loyalty to one’s country is not the same as loyalty to any particular political officeholder. It is the right (and some would say the responsibility) of citizens to oppose a government or individual actions of a government when they think they’re wrong or unjustified. The important thing is to make sure that acts of protest or resistance are constructive and meant to put the country back on the right course, rather than undermine it, even under the guise of short-term political efficacy. You might consider the following tactics for yourself and determine which fall under the category of “constructive” or “undermining” action:

All of the above political methods have their adherents, and some are more controversial than others. It’s not the job of River Valley Taekwondo or its instructors to recommend a position on any of them, because our Taekwondo school is not a political organization. Taking a stand on these issues undermines our primary purpose, which is to give students tools and values they can use to make wise decisions for themselves. We may not touch on these during a typical workout, but we hope to establish a framework—through promoting a system of values and methods, by providing access to books and cultural experiences that expand perspective and understanding, and by creating a community that epitomizes fair and virtuous processes in all we do.

1 Recall that it’s appropriate to discuss the Chinese language because the Five Tenets are rendered in Hanja, the formal Chinese writing that was used in Korea before the development of Hangul, which is in common use today. Chinese characters were used as the foundation for both Korean and Japanese written languages, so we refer to the language of origin rather than the Japanese that was most influential during the occupation in the first half of the twentieth century.

Note that “China” is itself a western word; the Chinese call their country “Zhōngguó.” Among Chinese speakers, the word zhōng can colloquially refer to China (a contraction of “zhōng guó,” meaning “middle kingdom” or middle country, i.e. the center of civilization). This contraction or corruption of the word conflates and reinforces the ideas of loyalty and country/nation in China, a concept that was likely absorbed and transmitted when using Hanja for the Five Tenets. As a side note, I’ve never understood why we don’t all just call foreign countries, people, and places by the same names they use for themselves—Deutschland for Germany, Hellas for Greece, and so forth. Actually, I do understand the historical and etymological reasons, I just don’t entirely approve of the practice—but that’s material for an essay to be published somewhere other than our Taekwondo school’s website.

2 Consider this longish quotation from Sang Kyu Shim’s The Making of a Martial Artist, p. 40, in which he describes a famous incident in Japanese history, in which a military commander destroys an important monastery/city during a campaign:

“This concerns Nobunaga’s burning of the Tendai monastery on Mount Hiei. Nobunaga justified his destruction of the venerable center of Japanese Buddhism with its 3000 buildings and 20000 residents by claiming the need for national law and order. He did not consider his act a result of a vindictive desire to avenge himself on the monks but rather a selfless act of devotion of the cause of unification. In his words:

I am not the destroyer of the monastery. The destroyer is the monastery itself. As you know, I am one who has not known a moment’s peace. I have risked my life. I have devoted myself to hard work and to a life of denial to personal desires. I have given myself to the hardships of a warrior’s life in order that I might restrain the turbulence within the land, check the decline of imperial prestige and restore it, improve the prevailing manners and customs, and perpetuate the benefits of government and religion. . . It is they who obstruct the maintenance of law and order in the country. Those who help the rebels are themselves traitors to the country. If, moreover, they are not destroyed now, they will again become a peril to the nation. Therefore, not a single life should be spared.”

What do you think about the above passage? For those interested in a complete account of this twelfth century Japanese military struggle, read The Tale of the Heike.