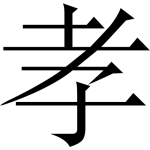 In a previous post, I discussed the complexity inherent in translating the Five Tenets of Jidokwan from Hanja—the original written language of Korea, which was derived from Chinese writing. This one examines our school’s second tenet, “Respect the Elder,” which has a backstory that’s useful for understanding the hierarchical structures in both Taekwondo and the larger Korean culture.

The Hanja character for this tenet translates literally as “Filial Piety.” Although it probably requires some unpacking for most Western readers, anyone in China or Korea would instantly recognize the term. It’s a core concept in Confucian thought and is a powerful piece of the social framework that pervades the society of both countries, from family life to the foundations of government. Countless works of East Asian history and literature, from ancient myths and legends to contemporary television shows, explore the thematic tension between filial piety and perceived duty to other people or situations. It’s so pervasive that it works on an unconscious level—by way of analogy, consider a westerner who’s not a Christian, but who nevertheless believes that people should treat other people the way they’d like to be treated themselves. For many in Korea and China, this sense of loyalty to the family, and especially to one’s parents/father, is such a powerful and fundamental social force that it may feel hard wired.

In the simplest terms, filial piety describes the deeply felt responsibility of individuals to honor their elders. In the Confucian ideal, a well-functioning society mirrors the structure of a patriarchal family. A person’s (i.e. son’s) greatest duty is to honor (his) father, then his father’s father, extending through a complex hierarchy of elder male relatives: older brothers, uncles, and so forth. Through firm but benevolent guidance, male family members assure the prosperity, health, and smooth functioning of the extended family. This is a highly reductive explanation of a complicated social concept, but to avoid making the post unreadably long, let’s move on for now.1 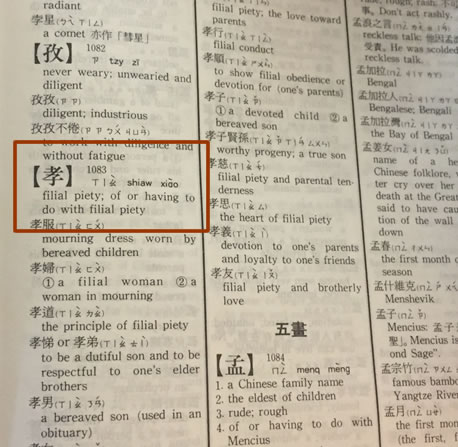 According to Confucius, the family unit is a metaphor for a smoothly functioning society of any size: family, community, nation, world. More accurately, it’s not just a metaphor—he believes that the same things that make a family work well also make social organizations work well. Regarding filial piety, these qualities are:

By extension, this means that when martial arts students choose to become part of a school, they accept the traditions and leadership of the school. It’s not impossible to question those things, but students recognize that there’s a correct time, place, and method for doing so. They also accept that there are limits to such inquiries and that they must be conducted in a thoughtful and respectful fashion. The leadership may engage the discussion and follow it as far as seems useful, but ultimately the conversation is on their terms and their decision is final. Martial arts schools are not democracies, and this hierarchical framework is common to both martial systems in general and to non-martial organizations with Confucian roots.

Adaptions for the Modern World

Because few people believe in a literal patriarchal model of organizing the family or society in this modern age,2 the concept of filial piety has been modified to be gender neutral. Our Second Tenet reflects this with the term “elder” in order to embrace the qualities of experience, wisdom, and good judgment without adhering to archaic and discredited concepts of male superiority and right to control.

To be clear: neither the tenets of Jidokwan nor River Valley Taekwondo in any way accept or propagate any concept of male superiority or literal patriarchy. At the same time, we recognize that when detached from gender, these structures offer a useful framework for creating a unified and smoothly functioning organization. Especially in a martial setting, when issues of ego and physical power have the potential to create dangerous or unhealthy dynamics, having a clear and strict hierarchy of control is essential. The dojang is not like a college classroom, where free thinking and upending of traditional norms is encouraged. The fundamental compact of agreeing to respect the decisions of the leader frees practitioners from distraction via the impulse to question foundational and sometimes inflexible traditions.

This concept has another obvious adaption for use in our martial arts school: expanding the concept of earned authority beyond that of age. We recognize both seniority and rank as related to, but different from, chronological age. Seniority in a school is important to consider, and we are always aware of who is senior—even among practitioners of equal rank, as I often notice when we form lines at the beginning of class. But even more important is the concept of earned rank, which confers authority similar to age/ancestry in the Confucian sense. In this way a 60 year old 7th Geup (yellow belt) defers to the Taekwondo knowledge of a 20 year old 3rd Geup (brown belt) with superior rank, while the brown belt would appreciate the wisdom and experience of a physically older comrade in training.

Choosing to deliberately submit to the judgment of an authority figure is problematic for some, and for anyone entering a new job, group, immigrating to a new country, and so forth, offering someone else control over certain aspects of one’s life requires trust. In responsible organizations, a leader must earn this trust by living up to a set of behaviors that describe wise and effective governance. Even in the oldest, most traditional interpretation of filial piety, straight from the teachings of Confucius, fathers were held to a high standard of specific actions and ideals. If they violated them, they were judged to be bad fathers and every bit as unworthy of respect as an unfaithful or careless son or family member.

For this reason, our line of Jidokwan3 has held an important corollary to Respect the Elder, which is just as important: Protect the Younger. As with Respect the Elder, this refers not just to age but extends to rank and seniority within the school. This makes explicit an idea which is often implied but not always achieved. We may hope that our authority figures are benevolent and have the best interests of followers in mind, but in some areas, this may or may not be true or even desired. In our school, the idea of Protect the Younger specifically charges the leadership to be mindful of the effects of their thoughts an actions on those who follow them. This serves as a safeguard against a number of potential failings, such as dictatorial behavior or excessive harshness in training.

The idea of protecting the younger isn’t just for leaders in the school. We are frequently reminded during sparring to be respectful of our opponents, and especially to be rigorous about using the exactly appropriate degree of contact as specified by the instructor who’s supervising a sparring session. In our school, this is usually non-contact sparring, and the ability to use full speed and force while keeping our opponents safe has always been a hallmark of our line of Jidokwan, from Mr. Choi’s dojang to the present. Even beyond our particular branch, Jidokwan practitioners sometimes refer colloquially to our sparring style as a “gentle” way, in large part because mutual respect and constructive levels of intensity and contact are enforced at every level. Learning to be strong and effective, taking charge of a situation without cruelty or pride, is as important as learning to use authority wisely in other regards, thereby ensuring the respect and loyalty of one’s fellow practitioners.

1 If anyone with knowledge of the role of filial piety in East Asian cultures would like to provide a more nuanced explanation, I invite you to do so in the Comments area below.

2 For the sake of accuracy, we might say “few reasonable people believe in a patriarchal model. . . ” to acknowledge that an unfortunately large body of people do, in fact, seem to support literal patriarchy, even to this day. People with that point of view should be opposed at all times within our school. We encourage, but leave it to each practitioner’s conscience, to decide whether they will oppose this point of view outside the context of our dojang.

3 That is to say, the branch of Jidokwan that preserves the vision of Choi Bong Young, via Sean Owen and his students.